Worm gearboxes are having cast iron gear case, worm shaft is of Alloy Steel, duly hardened and tempered. The worm wheel is made of Chill Cast Phosphorous Bronze. EP worm gear boxes have liberal ribbing for increasing heat dissipation area, streamlined sump for carrying more oil and fan of ample size which is effective in both side of rotation. Design Standards: Wherever applicable, British as well as Indian Design standards are used. Worm Shafts conform to case- hardening Alloy Steels, Worm Wheels conform to phosphorous-bronze as per BS 1400, While Gear case conforms to C.I. Grade 20, IS210.

Worm & Worm Wheels: The worm is made of case-hardening / alloy steel, duly hardened, ground and lapped and is integral with the shaft. Bearing journals ate accurately ground. Worm Wheels is made of chill cast phosphorous bronze and tightly fitted with the C.I. Centres. Worm Wheels teeth are generated on precision hobbing machines and high accuracy hobs.

Bearings: The Worm and Worm Wheels are supported on Extra Heavy Duty Tappet roller anti friction bearings of ample margin of safety to allow adequate journals as well as thrust loads. Overhung loads arising Out of sprocket or pinion drive are generally permissible because the gear case and bearing are designed for this duty. In case of heavy overhung load, and extra roller bearing can be provided.

Wheel Shafts: The Worm wheel Shafts are made of high tensile carbon steel, duly hardened and ground. It is of large diameter of carry the torsional as well as the bending loads which may be induced by overhung drives. 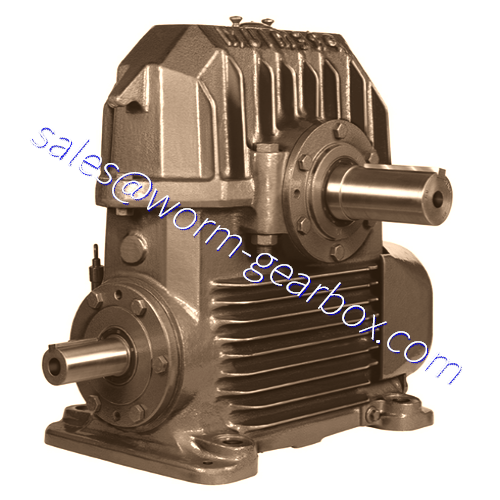